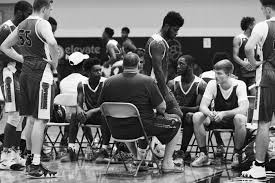 Coach Francis did what he has done for kids all across the country: He picked up the phone —contacted colleges on the behalf of student-athletes. This is a process that requires a plethora of time and resources. The passion, philosophy and what drives Francis is a redemption story that all should know.
BALTIMORE - Marylandian -- Dreams without Limitations
"Coaching is my way of giving back. Many coaches invested in me and gave to me when I was growing up…it's reciprocal. I know what it's like to need and not have; financially and emotionally."

Kyndall Francis is a "homegrown product," raised in the Montgomery County area of the Maryland suburbs. Growing up he didn't have family — only his mother, a single parent who saw to it that he had every opportunity possible. His basketball coaches and teammates became is surrogate family.

"Mom wore both the hats; she was mom and dad.  I wasn't the easiest kid to raise, but she never gave up, stopped believing or let the fact that 'dad wasn't in the house' stop me from doing things or living the life she felt I deserved," Francis said  "I know the life many of these kids live because I lived it before them"

More on Marylandian
How It All Began

"Coaching on the AAU basketball circuit in the mid-90's we just preached hard work and commitment to the process, working in the gym, commitment to the classroom. I always wanted to work on the whole person, the student and the athlete."

Rob Jackson, who coached Francis when he was young and went on to coach local stars such as Kevin Durant, Roger Mason, Ty Lawson and many others – wasn't just the mentor, teacher and father figure; but also served as the program director for the newly named DC Blue Devils.  Francis was taught by one of the games legends and original power brokers and helped to coach the 15u-17u squads.

Kyndall Francis is passionate about basketball. Really passionate. Yet when Francis was incarcerated for a crime that he didn't commit; he also became passionate about keeping youth out of the criminal justice system.

"I made a mistake over 20-years ago; that I acknowledged; I tell the kids it's important to take responsibility for the wrong things we do in life.  I also tell them that in a system stacked against them; that the best thing to do is to never do anything to get  into the system in the first place."

More on Marylandian
Francis continued, "I made a poor choices that put me in a position to be taken away from my family and the ones I love..  The Federal Justice system has a 94% conviction rate because most have to make a choice to accept what they've been accused of or risk a draconian sentence, the best thing to do is to always do the right thing.  I put myself in the situation and paid the price, I don't want any child that I coach or otherwise to experience that.  I want to help, coaching gives me that opportunity. I want all the kids to have a better life than I did"

Every workout or practice we watched was like a championship game. "You teach the kids the characteristics of champions and when championship situations arise there are prepared to perform at that level on the court and in life."