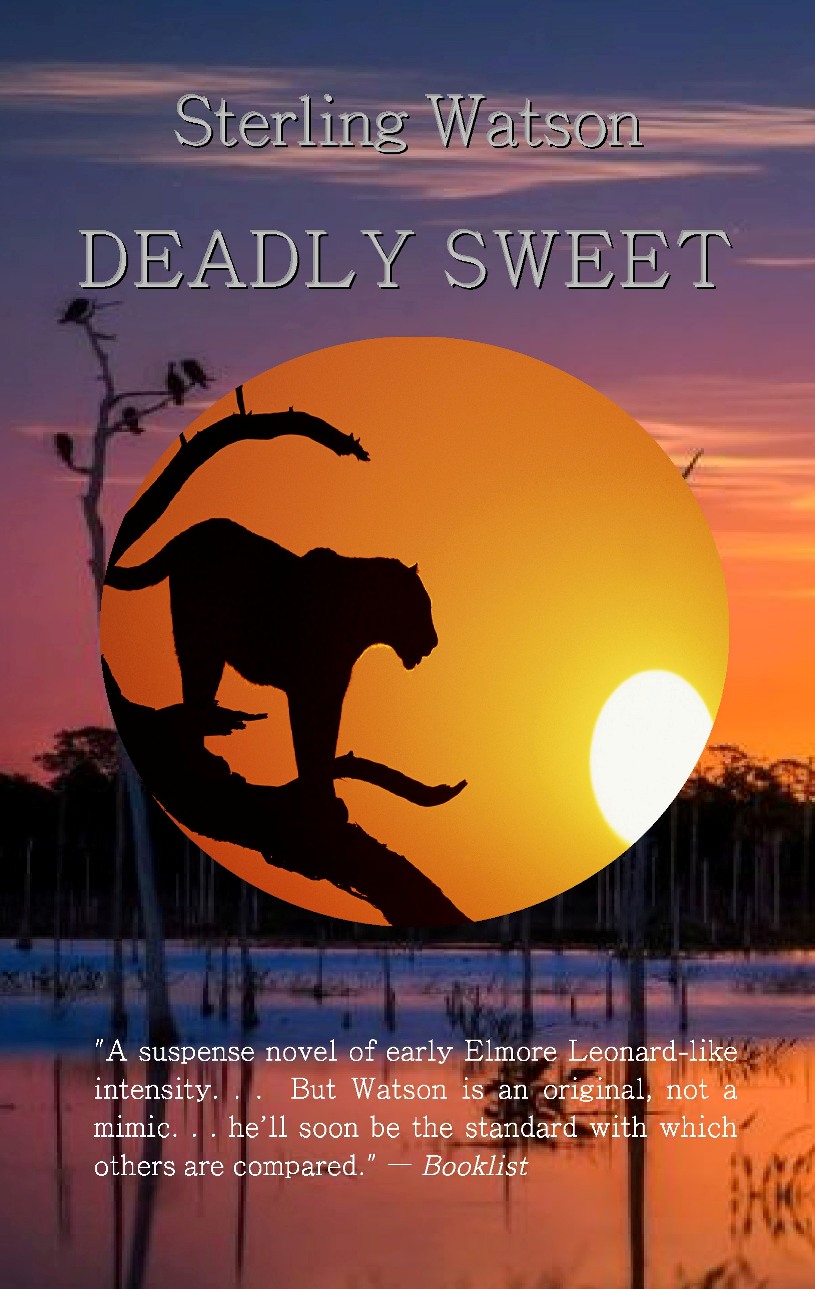 Of the book—which unfortunately has been out of print for two decades—Library Journal said,  "Contains all the elements of a good historical mystery. …Finely crafted characters, places, and events all bring a present-day Florida to life. …the author's resilient prose, precise imagery, subtle plotting, and local color should draw an appreciative audience."

And Publishers Weekly wrote, "Watson has created a stunning, intricate bit of Florida noir in this story about Eddie Priest. …It's hair-raising fun to watch the colorful characters work their own agendas."

When Corey Darrow's body was dragged from the canal where she had drowned in her truck, her hand was still clutching a cocked .357 Magnum.  She had come to Eddie for help, a black Irish beauty who was being harassed for raising the ecological flag in the rich dark ooze of Okee County—land of sugarcane, migrant worker, neo-colonialists, and rattle snakes as big a your thigh. A botanist had disappeared after making enquiries at Corey's water management office. Corey asked too many questions of the wrong people, the menacing phone calls began, and she suspected she was being followed. Running on regret for not sensing a serious threat, Eddie Priest drove to Okee City to check out how she had died.

More on Marylandian
He was downing Wild Turkey in the Cane Cutter Bar when Corey's double walked in—Sawnie Darrow, a senior aid to the governor. She had the same million dollar voice as her sister, and a dangerous taste for the truth. She didn't care about Eddie's wife, searching for her center in California, or his vaunted football fame. She wanted him to find out if her sister was murdered. This time Eddie couldn't say no.

With the help of insurance investigator Raymer Harney, Eddie was heading into a tangle of vested interests, furtive passions, greed, and unleashed mania that could trap the most ingenious hunter. The truth about Corey's death—and the dirty secrets behind it—might be rotting under a rock too deadly to kick over.

Carl Hiaasen said, "It takes a fine writer to get a grip on such a mad place, and Watson does it. His best characters are mangy, menacing, and too true to life. I see them daily on Highway One, and keep a safe distance."

Sterling Watson is the author of eight novels, including Weep No More My Brother, The Calling, Blind Tongues, Deadly Sweet, Sweet Dream Baby, Fighting in the Shade, Suitcase City, and The Committee.

Dennis Lehane described Fighting in the Shade as "a brilliant, fearless look at the savage rites of passage that exist in the fraternity of American sports, a book as gripping and unforgettable as any in recent memory." Of Suitcase City, Tom Franklin said, "If this taut literary crime novel doesn't center Sterling Watson on the map, we should change the maps." The New York Journal of Books said, "The Committee transmutes Lavender Scare investigators' ruthless assaults on suspected homosexuals in 1950s Gainesville into heart-racing fiction that's every bit as spellbinding as Watson's noir masterpiece Suitcase City." The Tampa Bay Times picked The Committee as one of the best novels of 2020.

More on Marylandian
Watson has been a fellow at the MacDowell Colony and the Virginia Center for the Creative Arts. He was director of the Creative Writing Program at Eckerd College for twenty years and is the co-founder with Dennis Lehane of the Writers in Paradise Conference, now in its 19th year. He teaches in the Solstice MFA Program at Pine Manor College in Boston.

Deadly Sweet can be purchased at Indie Bookstores, Barnes & Noble, Amazon, and Books-A-Million. Paperback and eBook versions are available.