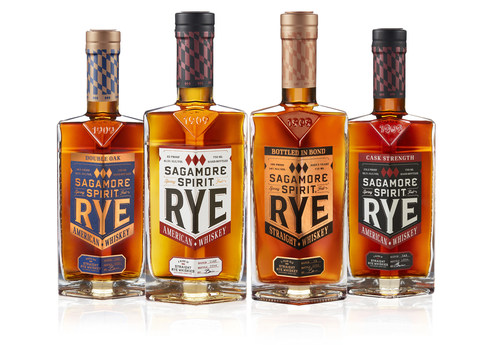 Second annual Bottled in Bond release is bold and complex; fewer than 2,000 bottles available for the holiday season

Coming a year after the brand's first-ever Bottled in Bond release – winner of a Double Gold award at the San Francisco World Spirits Competition – the 2022 iteration blends two straight rye whiskies, one with a high-rye mash bill, the other low-rye, adhering to the same proprietary recipe that has defined Sagamore Spirit since 2016 and has earned over 150 awards. True to Maryland's original style of rye, Bottled in Bond is balanced, versatile, and notably complex with flavors of rye spice, toasty caramel, and fruit and floral notes.

"Our vision of a rye whiskey fully distilled, aged and bottled in our home state of Maryland finally became a reality in 2021, but we knew our work wasn't done," said Brian Treacy, Sagamore Spirit's co-founder and president. "Bottled in Bond is a true testament to – and expression of – the place we call home, and the perfect sip for today's whiskey drinker. This 2022 release is aged one more year than last year's award winner, revealing even more Maryland character with more time in the barrel. It's another big win for our entire team."

More on Marylandian
A limited quantity of Sagamore Spirit Bottled in Bond rye whiskey is available in select markets across the country for an approximate retail price of $59.99, and at the brand's Baltimore waterfront distillery while bottles last.

Additionally, a line of Sagamore Spirit's ultra-passionate fans wrapped through the distillery's campus the morning of Saturday, November 12 to purchase the first-ever release of Sagamore Spirit Penny's Proof Maryland Grown Series. The release, which sold out in just a few hours, marked a milestone as the brand's first 100% Maryland-distilled straight rye whiskey made entirely with local grains and aged in barrels crafted from oak trees grown across the state.

The first 597 Whiskey Thieves, as the brand's fans are known, obtained a limited edition three-pack of 200ml bottles – one to sip, one to share, and one to savour – for the price of just one penny, nodding to the distillery's gleaming, 40-foot tall copper column still. Now in the series' fourth year, Penny's Proof releases have become an annual tradition, with past editions marking the brand's progress to 100% distillation in Maryland. Every release has sold out within hours.

Like preceding Penny's Proof releases, this year's 2.5-year-old edition is a preview of a fully matured whiskey to come, as the brand will release a taste of it each year until it reaches 4.5 years old.

While former releases were all distilled in Baltimore, the new Maryland Grown Series is the first to be made with all local ingredients, bringing the distillery's grain to glass efforts to the forefront. Beginning in 2018, the brand has been quietly developing a Maryland agriculture program focused on producing the highest quality rye grain for distillation. That effort has grown to over 200 acres in cultivation at nearby Sagamore Farm, and another 250 acres in partnership with local farmers. The program now produces over one million pounds of rye per year and 100% of the corn used at the distillery.

More on Marylandian
With the Penny's Proof Maryland Grown Series, the fruits of that effort are now being fully represented throughout their supply chain, from production to bottling; an expression of today's whiskey, crafted in partnership with local farmers.

To find a bottle of Sagamore Spirit Bottled in Bond, and learn more about the brand's grain-to-glass initiative, visit www.SagamoreSpirit.com to sign up to become a Whiskey Thief.

Inspired by the legacy of Maryland Rye and today's spirit consumer, Sagamore Spirit is driven to craft the world's best Rye Whiskey while strengthening its collective communities. Its award-winning five-acre waterfront distillery in Baltimore is reclaiming the city's rightful place in America's whiskey history, where storied distillers perfected rye whiskey for more than 150 years before Kentucky was founded.