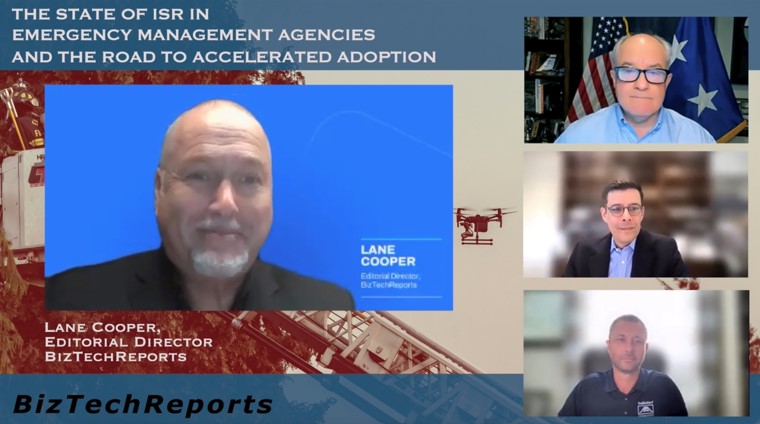 SILVER SPRING, Md. - Marylandian -- Intelligence, surveillance and reconnaissance (ISR) technologies have evolved tremendously over the past decade to cut through the fog of war, providing more clarity and better situational awareness to warfighters on the battlefield. As ISR technologies mature, decision-makers responsible for emergency management operations at the federal, state and local levels are finding myriad applications that are enhancing safety and effectiveness as first responders address floods, fires, earthquakes and other natural or man-made disasters.

Establishing a shared culture that values automation, standardization and ad-hoc collaboration will be critical to harvesting the full promise of ISR in support of emergency management missions.

These were among the conclusions of a virtual roundtable hosted by BizTechReports that featured industry leaders in the ISR technology community.

According to James Poss, CEO of ISR Ideas, and a retired major general in the United States Air Force where he served as Assistant Deputy Chief of Staff for Intelligence Surveillance and Reconnaissance, Army and Air Force National Guard and Reserve units have done an impressive job of providing a central point of engagement for the emergency management community. These units, he says, have allowed first responder agencies (including police, firefighters, emergency management technicians) from different jurisdictions to assemble, co-create and configure ISR solutions that are optimized to address the specific demands of an emergency or catastrophe.

More on Marylandian
According to Andy Vaughan, VP of ISR and Mission Systems at VITEC -- an IP video streaming and video encoding solutions provider for business, industrial and public-sector applications -- the multi-disciplinary fusion centers that emerged across the country in the wake of the 9/11 attacks in 2001 have played a vital role in establishing a broad culture of collaboration. The fusion centers represent a shared commitment across federal, state and local government agencies that own and operate them. Individually, each is a vital resource for integrating information from national and local sources to prevent and respond to threats and hazards.

Communication networks are the connective tissue for creating seamless systems that integrate people with the information, technologies and solutions needed to analyze and act through emergency situations. This, says Kevin Thompson, Director of Public Safety at TrellisWare, is where managed ad-hoc networks (MANETs) are playing an increasingly important role.

"There are more standards and conventions that can be integrated into the emergency management community to ensure even higher levels of voice, data and video communication interoperability from the National Guard and the Federal Emergency Management Agency (FEMA) to state and local emergency management agencies," said Thompson.

More on Marylandian
To see the full report and roundtable click here.