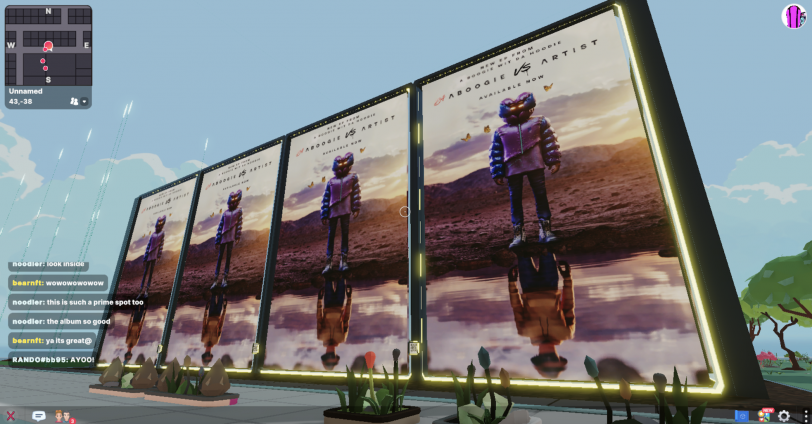 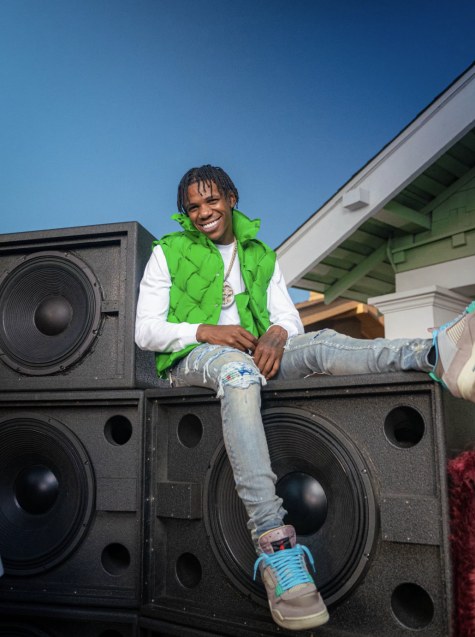 Visitors to the billboard-like campaign in the Metaverse were greeted by several sky-high posters wrapped around TerraZero land parcels in Decentraland, as well as 'Glasses', a track of the new EP 'B4 AVA'
LOS ANGELES - Marylandian -- Atlantic Records has further expanded their marketing efforts into the Metaverse, by teaming up with TerraZero, for a unique marketing campaign to promote A Boogie Wit Da Hoodie's new EP, 'B4 AVA.' The activation was highlighted by several Metaverse billboards featuring A Boogie Wit Da Hoodie's new release, as well as music playing from the EP and other interactive and visual elements to round out the experience.

More on Marylandian
"The experience itself makes the music and the artistry of A Boogie Wit Da Hoodie feel larger than life," shares TerraZero Chief Metaverse Officer Ryan Kieffer. "It's designed to serve as a memorable, interactive and personalized experience for attendees, reminiscent of a musical exhibition or installation, that will promote social media engagement and word of mouth promotion for the EP."

"The Metaverse is happening. It's inevitable. It won't be at the flip of a switch, but the next few years will bring about technological innovation at an extraordinary pace. These advances will help level the playing field, creating opportunity for a wide range of artists," added Jordan Chalmers, Director of Content Partnerships at Atlantic Records. "We are beyond excited to team up with TerraZero to bring A Boogie into Decentraland. Atlantic has only begun to scratch the surface on Web3 and I can't wait to see what we do next."

B4 AVA is also the first major body of work from A Boogie since the release of his highly praised third LP 'Artist 2.0', which is certified platinum and debuted at #1 on Billboard's Top Rap Albums Chart and #2 on the Billboard 200 Albums Chart with first-week streams exceeding 141 million. The album boasted a star-studded tracklist including features from, Young Thug, Roddy Ricch, Summer Walker, Khalid, Lil Uzi Vert, Gunna, London On Da Track, Trap Manny and more.

Metaverse-savvy users already familiar with Decentraland could also peek behind the posters, revealing a scene filled with butterflies and a lake--calling back to the EP artwork. This is the first of many activations that Atlantic Records is exploring throughout the Metaverse.

More on Marylandian
About A Boogie Wit Da Hoodie:

The Bronx-bred artist Artist Dubose, better known as A Boogie Wit Da Hoodie, first hit the rap scene with the breakout hit "Still Think About You" which was featured on his 2016 debut mixtape, ARTIST. The mixtape also introduced fans to "My Sh*t" which has since become RIAA certified 2x platinum and was also listed as one of "The Best Songs of 2016" on Apple Music. A Boogie quickly proved himself to be one of the game's newest heavyweights after XXL dubbed him as "one of the hottest and newest up-and-comers in hip-hop" and included him in the 2017 Freshman Class. The young star also went on to release the 5x platinum single "Drowning feat. Kodak Black" and 4x platinum "Look Back At It," along with the 2x platinum certified single "Jungle" and platinum certified "Timeless." During the fall of 2017, A Boogie went on to release his highly anticipated, now gold certified, debut album, THE BIGGER ARTIST, which quickly sprung into the Top 5 on Billboard's Top 200. He also became the top emerging acting in the U.S. as he simultaneously sprung to #1 on Billboard's Emerging Artists chart. It is easy to see why The New York Times named A Boogie "the most promising young rapper the city has produced in some time." A Boogie earned a BET Award Nomination for "Best New Artist" at the end of 2018 in addition to releasing his 2x platinum sophomore album, HOODIE SZN, which made its debut at #2 before spending three nonconsecutive weeks at #1 and maintaining a stunning 17-week streak within the top 10 on the Billboard Top 200 chart. The album also soared on streaming, garnering over 83 million streams the week it went #1.  After embarking on his sold out "A Boogie vs. Artist" Tour, A Boogie released his third studio album, Artist 2.0, and its subsequent deluxe edition which boasted collaborations with Young Thug, Roddy Ricch, Gunna, DaBaby, Summer Walker, Khalid, Lil Uzi Vert, and more, and debuted at #2 on the Billboard 200 with over 120,000 album equivalent units, topping HOODIE SZN's debut week. Following the album's release, A Boogie made a stunning debut on The Tonight Show Starring Jimmy Fallon, performing the fan-favorite track, "Me and My Guitar," accompanied by H.E.R.. In 2021, A Boogie reemerged with his latest single, "24 Hours" with rapper, Lil Durk.